A working plumbing and drainage system is central to your home being a happy and hospitable place to live. Your plumbing is as essential to the way your home works, as veins and arteries are to the human body. When something is wrong, whether it’s just a simple issue with a leaking boiler or something more serious, it can often bring your home, and your life, to a halt.

Luckily, in most cases, you can call out a plumber for an emergency fix, and be back up and running the very same day. But what happens when a recurring plumbing problem is something more serious – symptomatic of the very house, or area, you’re living in?

It can be difficult to diagnose systemic problems with the build and plumbing of your home, without first being notified of a problem. Especially when buying a home where endemic issues may have lurked unrecognised or solved with quick fixes by the previous owners for decades.

Specific problems may be caused by the age of the home. Older builds did not have access to the same kind of technology in use today, and may be unreliable because of it, or, at worse, dangerous because of the use of materials used in certain time periods.

Types of Housing in Bristol

The city of Bristol has a lineage dating back to the 11th Century and has undergone two main periods of rapid expansion; in the 19th Century, during the industrial revolution, and 20th Century after the city was heavily damaged by the air raids of WW2. Because of this, there is an extraordinary range of architecture on display throughout the city, from the Georgian houses of Clifton to the brand new housing developments in the South.

If you’re looking to buy in Bristol, knowing what surprises could await you in your new home could potentially save you money, by shoring up potential issues from the outset.

After working in many different houses across Bristol over the years, we’ve learned which kind of houses are most at risk from specific plumbing problems. When looking into a new home, take a look at the list we’ve compiled below to see what your new home may be at risk from – and what to do about it.

Between professionals from London priced out of the capitals housing bubble, and a population that is growing at a rate four times faster than new houses are becoming available, Bristol is a city in the middle of a housing crisis.

The discrepancy between the growth of the population over the past year, 1.55%, to the number of new homes built, 0.43%, has lead to an increased demand for new housing. Especially with there being a marked disparity between the number of houses available for ownership and rent and house prices that are 20% higher than the national average and have risen by around 50% over the past decade.

A new housing company owned and run by the people of Bristol is set to initiate a five-point plan to solve the cities housing crisis, marking the first significant investment in public housing in Bristol for two generations. Planning the development of thousands of new homes across the south of the city, with at least 2,000 new homes built at Hengrove and Hartcliffe, and the largest new council housing project in decades in Ashton.

However, there are specific issues in the construction of new developments that have come to light over the past few years, especially in cities with similarly imperative needs for new housing.

The lack of proper government regulation and oversight, an ever-rising demand for housing and shareholder profit taking priority over quality, has fueled what has been branded by the Government as a broken housing market. Where multiple homes are being built, and bought, to substandard conditions.

According to housing charity Shelter, more than half of these reported problems have been due to major issues with construction and internal plumbing, with ill-fitting bathrooms, unconnected drain pipes and collapsing ceilings amongst the most chronic problems.

Large building contractors with market monopoly often use cheap materials and speed through necessary quality controls in order to profit from the demand for affordable housing. And these contractors are unfortunately far more likely to get a hold of these large contracts than Bristol’s SME builders. In 2017, one of the UK’s largest developers, Bovis, was forced to set aside a £7m fund to repair substandard homes and announced it would scale back its projects after claims it paid purchasers to move into unfinished homes to meet completion targets.

The new Bristol developments may fare slightly better, being lead by the consumers, rather than the developers. However, large companies like Persimmon, who have also recently been subject to poor reviews, still sell a number of properties in and around Bristol. With houses from one of their latest developments at Imperial Park, along Wills Road, between Hengrove and Crox Bottom, still available to buy.

Not that we are discouraging you from buying a new-build, as their affordability often trumps other houses on the market, especially for first-time property buyers. However, use due care and always have your potential new-build checked out by an independent plumber before making any moves to cement your purchase.

If you feel like your home is currently being affected by any of the issues raised above, contact the Home Owners Association, or read the information on their website to see what you can do.

Back in the 1970’s, micro-bore pipes were the revolutionary plumbing material for central heating systems. The simplicity of installation meant that installing the pipe-work for a central heating system was often regarded by homeowners as a DIY task and a way to save a small fortune by not hiring a plumber. The largest concentration of homes affected by this in Bristol can be found in Bradley Stoke and other areas with a large amount of council redevelopment in the 1970’s. 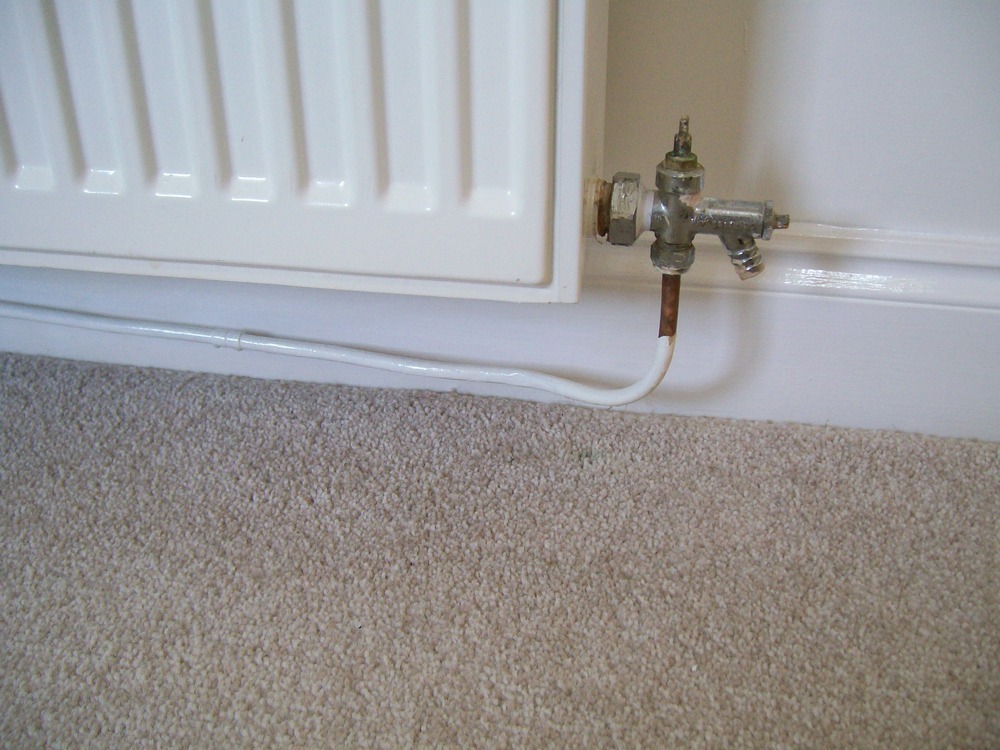 However, systems were often incompetently plumbed. With homeowners ignoring the guidelines of boiler output capabilities and radiator output, and kinking the pipes instead of carefully manipulating them into curves. Due to this, the pipes can be blocked extremely easily and require special equipment to fix.

Always have an independent survey done by a local plumber before moving into your new home, in order to assess any potential problems that may arise in the near future.

Period homes often tend to come with their own set of issues related to general old age, as well as to specific time frames.

Damp can be an issue in the majority of old homes, and you should always keep an eye out for any odd smells, cracks, stains and crumbling plaster. Often damp can be solved without calling out a plumber; simply by adding insulation to lofts, walls and glass windows, keeping your home well ventilated and maintaining a constant temperature within your home.

When buying any old home always check when any upgrades to the plumbing and electrics were undertaken, as this may be an expense you need to consider. You also need to ensure that you are given all the relevant building, PAT testing, and gas safety certificates by your landlord or the previous owner. These are essential to check the safety and legitimacy of all your gas and electricity work – as a surprising amount of homes in Bristol are still at risk from illegal gas fittings.

The prosperity of Bristol in the 18th Century lead to a building boom. Most of the houses built in this period can be seen in Queen Square, spreading up Park Street, along Hotwells and across Clifton Village. The houses on Sion Hill, Portland Square, Berkeley Street and Pritchard Street being notable examples of Georgian architecture.

Typical Georgian homes, with sash windows, multiple chimneys and wooden floors, often find draughts a significant problem. And their solid stone walls tend to lose an average of seven times more heat than walls in new homes. All of this can equal sky-high energy bills and render your heating systems entirely inefficient; working harder and costing you more, for what feels like much less.

Simply fitting an A+ rated efficient boiler won’t really do anything to solve the root cause of the problem.

Alongside a service of your boiler to check that it is working to its fullest capacity, installing programmable thermostats and smart metres are a great way to ensure you’re heating your Georgian home as efficiently as possible. Raising the shallow roof pitches to add extra insulation can also be successful. Draught proof your loft hatch and ensure that all of your heating and hot water pipework is well insulated.

However, many Georgian homes are listed, so you may require consent from your local council to make any structural changes to your plumbing, or the house itself.

While the Clifton Suspension Bridge, one of Bristol’s most iconic landmarks, is a hallmark of the Victorian era. The sheer volume of terraced homes in suburbs like Montpelier, Bedminster, Clifton, Kingsdown and Redland show their engineering influence throughout the city.

In Victorian builds, one of the critical things to look out for is the use of lead piping. Although it was also used as a building material until the 1960’s, and not banned from sale until 1992.

Easily recognisable by its dull, grey finish, lead piping can be a dangerous thing to leave unnoticed. Where lead is used in water pipes it is possible for people to ingest or inhale the toxic lead particles, which can lead to lead poisoning and further illness.

Although the hazard of lead saturated water is less significant in hard water areas, like the majority of Bristol, if your house uses lead pipework to carry water, you should work with a plumber to remove and replace it as soon as possible. Preferably with far safer copper or plastic piping. In the interim, use water filters to sieve out lead particles.

Whilst this won’t necessarily affect your day to day life – apart from living in a stunning home – it will have an impact if you plan to make any changes to your plumbing.

Usually, Listed Building Consent will be required if you would like to add a new bathroom or alter an existing one, and you should always seek advice from Bristol Council before undertaking any changes.

If your bathroom has modern fittings, or you simply want to refurbish an existing bathroom, this should not usually be a problem unless your home has original Victorian or interesting 20th-century fittings. Which could be part of the reason why it is listed. Refurbishment should still be possible but will need extra care.

Undertaking structural work, that will affect the historic fabric of the house, will most likely always require consent from the local council. This may affect how you deal with endemic problems such as condensation build up, as improving ventilation by cutting in a new vent may not be possible, requiring you keep a flow of air through opening windows instead.

If you’re worried your home is at risk from any of the problems we mentioned in this article, please don’t hesitate to contact us on 01179 093 967